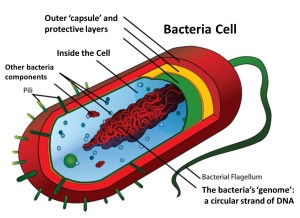 Humanity is engaged in an epic battle against fast-adapting and merciless predators. Not zombies, but by deadly pathogenic bacteria that have gained resistance to antibiotics.

Humans have co-existed with bacteria throughout our history. They live in our bodies from birth to death. It’s estimated that up to three percent of a typical human’s body mass is made up of symbiotic bacteria, which assist us with bodily functions like digesting food.

Most bacteria in the human body are kept in check by the body’s immune system. But bacteria are constantly evolving to survive and reproduce. Either the immune system successfully adapts to new threats, or the body risks being overrun. Sometimes the immune system will fail to respond allowing the bacteria to kill the host.

Before antibiotics were widely available, any accident, injury, or medical procedure that allowed pathogenic bacteria into the body was potentially deadly. One in nine skin infections was fatal. One in three cases of pneumonia led to death. Invasive surgeries including caesarean sections left the patient open to killer infections. Insect bites, burns, and blood transfusions frequently became a source of infection.

The discovery of the first antibiotic, penicillin, by Alexander Fleming in 1928 remains one of the high points in medical history. Antibiotics kill bacteria, which meant wounds were no longer death sentences.

The Centers for Disease Control and Prevention recently warned that drug-resistant bacteria kill at least 23,000 people annually in the U.S, and cost the health care system $20 billion per year.

Developing antibiotics is still expensive, and the antibiotics that we do have are still being over-prescribed for humans and doled out in sub-clinical doses to farm animals — both of which gives bacteria opportunities to develop resistance.

Microbes inhabit just about every part of the human body, living on the skin, in the gut, and up the nose. Sometimes they cause sickness, but most of the time, microorganisms live in harmony with their human hosts, providing vital functions essential for human survival.

Researchers found, for example, that nearly everyone routinely carries pathogens, microorganisms known to cause illnesses. In healthy individuals, however, pathogens cause no disease; they simply coexist with their host and the rest of the human microbiome, the collection of all microorganisms living in the human body.

This is wild. I read it several times, and it still says the same thing. “It appears that bacteria can pinch hit for each other. It matters whether the metabolic function is present, not which microbial species provides it.” Things in nature with no brains are amazingly smart.

NOTE: We do not save credit card information. Your order is sent to our processor over a 256 bit encrypted channel and totally gone from this site.